I recently read with interest Chris O'Brien's column, How Twitter could be a threat to Google. At first the headline gave me pause, "yeah right and how's that?" As a novice Twitter user I hadn't seen the connection. Then I got it. Real-time search.

Back in 2005 I spent a year helping a small start-up called PubSub with ambitions to be the next Google. PubSub was the creation of Bob Wyman who had studied the problem of real-time search and realized that in a publish-subscribe model the solution is to store the queries and match them against the published data. He called this "prospective search" because you're essentially saying "Tell me when this happens." Google search is "Retrospective search" as it searches what has already happened. Surely the argument went, the prospective search world must be as big if not bigger than the retrospective world. 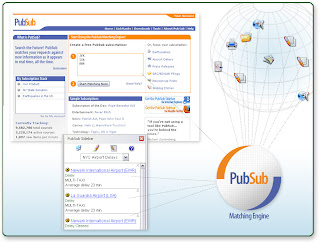 But unfortunately in 2005 the Internet had few real-time publish-subscribe data feeds. One such data feed that was experiencing exponential growth was blogs. So PubSub's first popular use was as a real-time search service for blogs. PubSub's many followers used the service to track mentions of anything of interest as it occurred in the blogoshpere - providing immediate notification and the opportunity for immediate response.

While Google, Yahoo and others tried to perform real-time search through their "Alert" function it never worked adequately. The main reason is their alerting mechanisms are based on repeated "retrospective search." The delay in that approach means that alerts to matches can be considerably later than real-time as I pointed out in this blog post, Cutting Through The Incessant Barking

Unfortunately for all of us at PubSub and everyone that had grown to depend on the service our efforts suffered and untimely death.

”… an idea to make a more ‘live’ LiveJournal. Real-time, up-to-date, from the road. Akin to updating your AIM status from wherever you are, and sharing it.

Tweets have evolved from “I’m having breakfast” and “I’m watching it snow” to a powerful tool for building brand and a great way to keep up with what you’re passionate about. And because systems like Twitter and Facebook are open there is a whole industry for tools to help make them more effective. Now media giants like CNN are using such tools as a sort of police scanner to be alerted to the next news story. CNN broke the story of The Turkish airline crash which it was alerted to it by Twitter.

Hopefully with the $35M in venture capital Twitter can accomplish what PubSub couldn't. I look forward to the day in the meantime I'm becoming a Twitter power user. You can follow me at http://twitter.com/RichardTreadway.
Posted by Richard Treadway at 3:57 PM

View my complete profile
>> EMAIL ME